The Chinese are fascinated with height. Skyscrapers are a given (the entire foreground of this photo was farmland just over 20 years ago), but they seem to be blown away by tall people. I visited the Jin Mao Tower (the one in the front that looks like a golden asparagus spear) with a buddy of mine. I’m pretty tall, but my buddy absolutely towers over the locals at 6’6″. When he’d come around some corner and surprise some group of women, they’d just look up and laugh at how huge he was. So while, while were waiting in line to ride the elevator to the top of Jin Mao, there was a cardboard model of the tower and Chinese tourists were lining up to take my friend’s picture next to it – as if he were some giant looming over Shanghai.

This photo of Shanghai made it to “Explore” on Flickr and got over 20,000 views on the first day!  I had to laugh at the comments though, they’re full of those random “awards” that people post all over Flickr.  I appreciate the attention, but I honestly don’t get the point of these comments with images of awards…  It feels fake to me.  If the image moves you, why not say something about what you liked about the shot, or the memory it triggered, or something that tells me something about you?  Sometimes social media doesn’t feel very social to me, as if we lost the ability to talk to other people when we can’t physically see or hear them.  I kind of wish Flickr would disable the ability to post images in comments, it seems like that would stop some of these silly “comments”.

How I edited the shot…  Even though I shot a bracket, I only used a single RAW file for the final image.  The fact that it was a hazy blue hour meant the contrast was manageable.  There was plenty of detail in the single exposure, since I’d shot a 14-bit RAW at low ISO – and I didn’t need to bring back more detail in the brightest lights.  I edited in Lumenzia using a luminosity mask for contrast in the foreground, a different luminosity mask to bring out contrast in the buildings in the hazy distance, a vibrance mask to bring out more of the orange colors, and a custom vignette to help bring attention to the Jin Mao Tower in the foreground. 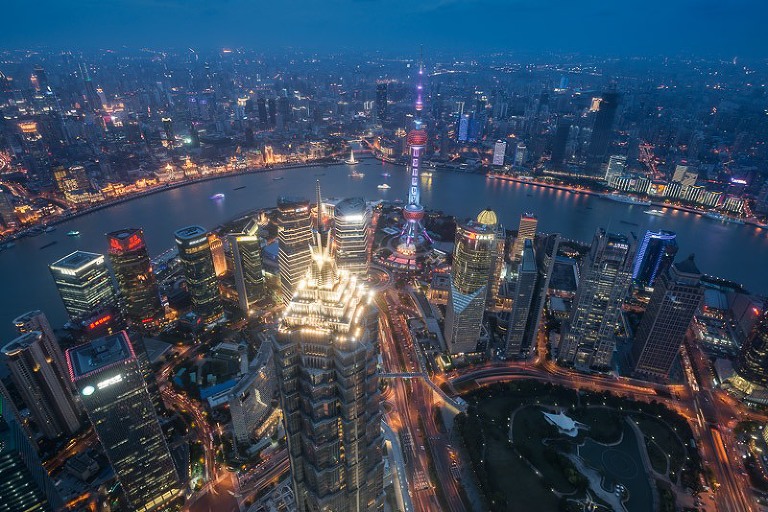