The Supermoon Towers Over Minneapolis 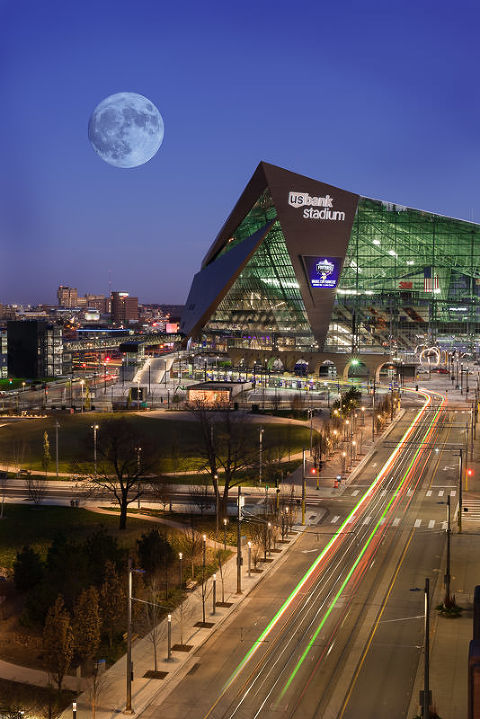 There’s been a lot of chatter about last night’s “supermoon“.  I don’t usually geek about about that sort of thing, but it’s apparently the biggest mooning since Forest Gump.  So I thought it would be fun to shoot the supermoon rising over the new Viking’s football stadium downtown, soon to be home of the 2018 NFL Super Bowl.  Massive doesn’t begin to describe that place.  It’s TWICE the footprint of the previous Metrodome.  It makes that ~12 story Marriott in the background look tiny.  It’s also an amazing venue for large concerts.  I went with some good friends to see the Metallica concert at US Bank Stadium when it first opened.  The interior was filled with smoke for the concert lighting, and the setting sun created these ethereal rays of light through the glass windows.  At the end of the concert, they dropped a hundred giant beach balls from the ceiling.  It was like watching popcorn pop as everyone on the floor bounced the balls high back into the air. I can’t wait to get back for another show!

Technique:  I created the final image by blending numerous exposures with Lumenzia and Photoshop.  I used 5 exposures for the basic exposure blending, 3 for the streaks of the light rail, and 1 for the moon.  The primary composition was shoot with a 50mm lens using typical settings.  Shooting the moon at this scale required a 400mm lens and a very fast shutter speed (1/125s).  That fast shutter is needed both because it is so much brighter than everything else (since it’s the only thing lit directly by the sun at night), and because it moves fairly quickly when viewed through a telephoto.  I could see the moon moving across the LCD as I focused.

I did the location scouting using the Photo Pills app for iPhone to ensure I would be able to get the moon from this vantage point.  If you haven’t tried it, I highly recommend it.  It’s awesome for planning these sorts of shots.  Just be aware that, due to the limitations of the iPhone’s compass, the sky can be +/- 15-20 degrees when using the augmented reality feature.  So, it’s a good idea to use the visual calibration feature or check the moon rise/set lines on the overhead map if you’re shooting a tight composition.