You don’t see a lot of people deliberately drive their trucks into the ocean.  That is, unless you live  in Pacific City, Oregon – home of the Pacific Dory Fleet.   I stood on this sandy beach beach at Cape Kiwanda, where I could see this gorgeous sunrise sky over haystack rock in front of me – and fisherman frantically launching their Dory boats.   These little wooden boats have bows at each end and a flat bottom that’s perfect for launching on the boat.  It seems like a game of cat and mouse with the sea.  These guys would back up at high speed, dump their boats off the back, and then drive away before the waves could get a chance to bury their tires in the sand.  There are more than a few stories of these trucks getting stuck in the sand, leaving the owner to watch helplessly as the ocean slowly taunts them with the slow but relentless rise of the tide.  The lucky might get pulled out by a tow truck or with a winch, but many have been lost to the salty water.

As I stood on the beach watching the receding waves wash back over the perfectly flat sand beach back to the ocean, I couldn’t help but feel like haystack rock itself was launching into the sea.  Off to my right were the stunning sandstone cliffs and sand dunes of the cape, reminders that this must have all been one big piece of land eons ago.  And some day it will head out into the ocean, like so many Dory boats.

Technique:  I took two similar exposures at 1 second and f/16.  The first was a wide 16mm shot to capture the stunning wave action and clouds.  The second shot was zoomed into 35mm to capture the grandness of haystack rock.  I blended the zoomed haystack rock into the wide angle shot, using Lumenzia to selectively preserve the wave crests of the wide image in the merged image.  I then used Lumenzia to add targeted contrast/color, dodge and burn the waves/rock to give them more depth, and added a bit of vignette. 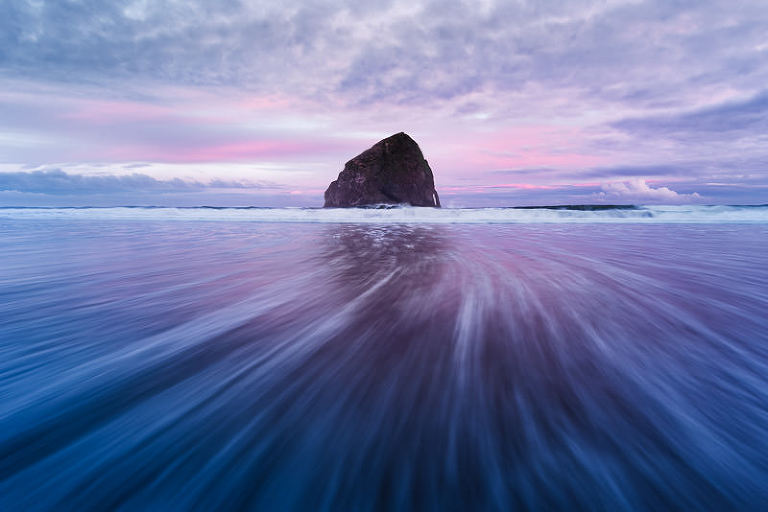