It’s hard to appreciate what windchill really means until you stand in 20 degree weather, absolutely freezing in a breeze so slight you could hardly tell it exists, and then move toward a cavern and find yourself so warm in the stillness you start pulling off your gloves.

My friend Joe and I left Moab around 4 in the morning heading towards Arches National Park to shoot the stars over Double Arch. After some time, I looked to the horizon and thought I must have gotten something on my glasses. It looked like to headlamps approaches with a faint smear of light between them. After a few moments, I got this feeling of Déjà vu.

I’d seen this before, a crescent moon rising over rock. The tips of the crescent appear first, like two small stars. In between, the dark face of the moon is actually lit so subtly you can barely tell, but it’s there. Soon, the rest of the moon appears to resolve the mystery. I’m not sure I’ll ever get used to that experience. And so the morning continued to move on like that, one incredible moment after another until this beautiful morning glow washed over the whole scene.

I rarely shoot panoramas in the traditional sense, but sometimes a scene calls for some creative shooting. A 14mm wide-angle wasn’t even close to capturing the grandeur of these arches. And I didn’t have a “nodal slide”, which would have allowed me to shoot more efficiently without distortion. So I needed an extreme amount of overlap to make sure I’d be able to blend everything. 44 photos, that’s what it took to make this image. 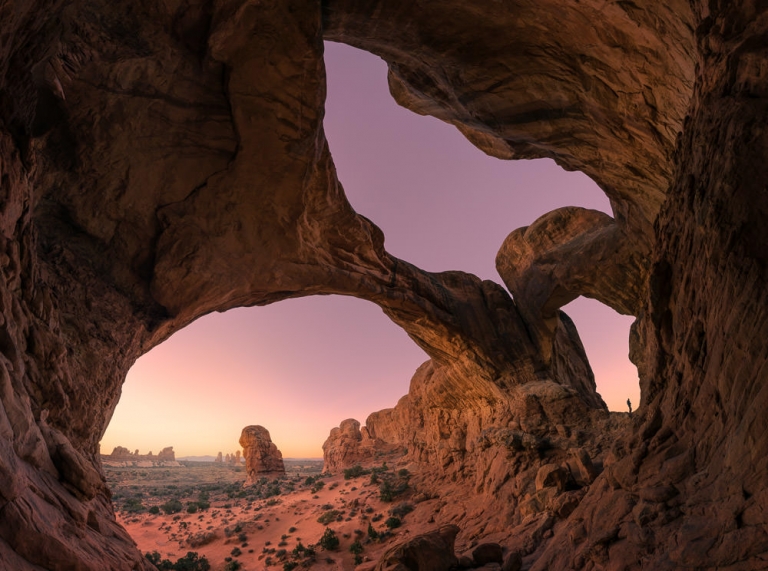