The Floating World of Zhangjiajie

If you’re thinking that this is Pandora from the movie Avatar, it is.  Well, the mountains don’t actually float in the sky, but they look like it!  James Cameron had a scout photograph Zhangjiajie in China as the inspiration for Pandora.  The Chinese even renamed the Southern Sky Column “Avatar Hallelujah Mountain”.  There are 3000 of these beautiful sandstone pillars throughout the part.  It’s pretty wet, so they’re all covered in lush green.

To get here, you can take a bus from the base of the mountains and walk a trail at the top, or you can hike from the base.  I opted for the hike, which was definitely a bit of a workout, but so peaceful – there was absolutely no one else on the trail.  At the top, things get a little crazy.  I went in November, which isn’t peak tourist season, but a few of the photo lookouts were so packed I was getting pushed up against the split rail fence by a mob of Chinese tourists.  I kept asking my guide if anyone ever falls off the ledge and he said no, but I’m still a little suspicious.  To be honest, the crowds didn’t bother me – most of the trail was pretty open and the views were stunning everywhere.

If you are considering traveling to Zhangjiajie, especially for photography, I highly recommend the guide who showed me around the area – Bruce Tian.  His English is good, he’s incredibly kind, was fun to travel with for three straight days, knows the area extremely well, put together an agenda so good I didn’t bother asking for a single change, and (most importantly for me) knows what photographers need to capture great scenes in the best light. 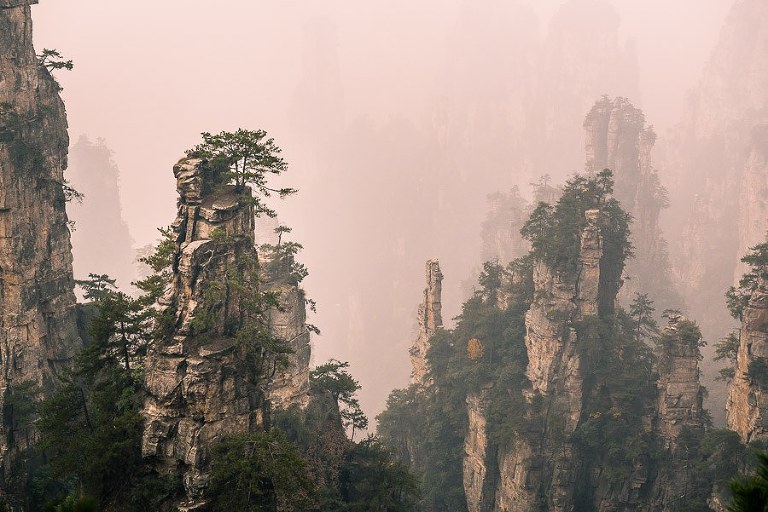 Radiant Minneapolis »« Is an upgrade from the Nikon D800 to D810 really worth it?