I’ve spent the last couple weeks shooting in the United Arab Emirates.  It’s been an amazing trip on so many levels – I’ve met many incredibly gracious people, had the chance to photograph the Dubai skyline from numerous rooftops, and thoroughly enjoy a part of the world I’ve never seen.  One highlight for me was visiting the Sheikh Zayed Grand Mosque is located in Abu Dhabi.  It’s probably the most awe-inspiring religious site I’ve ever visited, certainly on level with climbing up to the Tiger’s Nest in Bhutan.  After a failed attempt to bring in my tripod the first day, I was granted access on the second and proceeded to spend seven hours shooting the mosque.  My heels ached by the end of the day, but I never got tired of it.  Every inch of it is amazing.

But something else caught my attention about this image, it looks great without doing any work.  I haven’t done anything to this image yet.  It’s just the untouched RAW image from the middle frame of a panorama.  Often times, I receive questions from other photographers trying to use luminosity masks to enhance poorly shot images.  Sometimes, you don’t have control over when you’ll be able to shoot an image.  But more often, I see images that suffer from poor understanding of light, casual planning, or improper exposure.  Just as you camera’s sensor depends on good lighting and composition, so does Photoshop.  Luminosity masks can help you achieve amazing results, but they are still built from the image.  So as the saying goes, “garbage in, garbage out.”  A low quality image will limit the quality of your final result, and will likely increase retouching time to get a decent result.

I shot this image at the moment the natural light and artificial lights were in harmony – a little past the point where they were the same, as I wanted the building lights to draw more attention than the sky.  But you can see immediately that the final image is going to look great, because the original image looks amazing.  I don’t need to blend any exposures because I could capture all the detail at this time of day.  I’ll still use luminosity masks to retouch the final image, but it’s should be a pretty edit.  Even the stitching should be easy.  Actually, I did a test stitch just to make sure I got the shot before I leave Abu Dhabi, and it merged perfectly.  I shot with a 24mm tilt-shift lens for straight verticals and a sharp image.  And I used a pano head adjusted for the nodal point to make sure the foreground will stitch easily/properly.  That technique may sound intimidating, but it’s actually simple after you’ve done it a few times.   I can’t wait to get home and work on this image, it’s already one of my personal favorites. 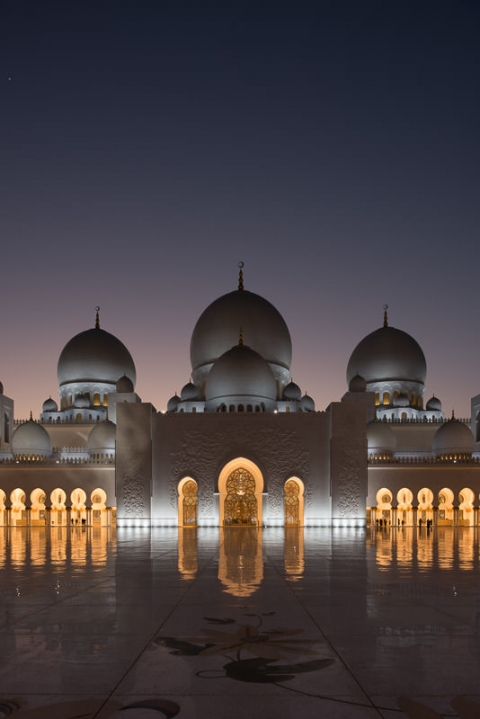