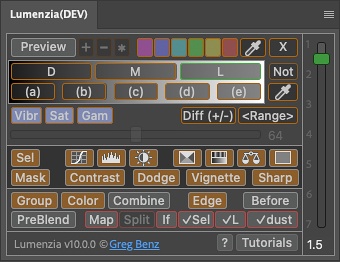 Many of you (including myself) are eagerly awaiting the arrival of a new Apple Silicon (“M1 Pro/Max”) MacBook Pro. The speed, battery, and display all look incredible.

As you may be aware, Apple Silicon is a huge technology shift where software which is optimized for it can run faster. That naturally raises questions about my own software, which means migrating to Adobe’s UXP platform to run natively for best speed. Web Sharp Pro is already a UXP panel and runs natively on Apple Silicon. Lumenzia v9 is already 100% compatible with Apple Silicon (under Rosetta).

I’m happy to announce that Lumenzia v10 will become available starting Oct 27th as a beta (with official release by the end of the year). This is a FREE upgrade for all Lumenzia customers (even if you bought 6 years ago) and will be a UXP panel which runs natively on Apple Silicon for an extra speed boost and simpler installation.

This launch will be different from previous ones because the Adobe APIs required to support Lumenzia’s needs have only recently become available. It will therefore be going through a beta phase to provide access as soon as possible. To avoid sending too many emails, I will not be sending regular notification of new betas. Instead, you can stay informed and try the beta by checking the Lumenzia beta page I have created. I anticipate the beta phase will last for 3-4 weeks, where I plan to rapidly address any reported bugs. Upon completion of the beta testing, I will email all customers to notify you the official Lumenzia v10 is officially available.

I’m adding some questions and answers here, but please comment below if I can help clarify anything for you.

Q: When will Lumenzia v10 be available? What is the latest version?

A: Please see the Lumenzia beta page for the latest information on timing/versions and how to get the beta.

Q: Is this a free update?

A: Yes. If you’ve been a customer since v1, you’ve received >1500 new features, updates, and fixes for free and I’m happy to continue offering free upgrades as thank you for your support and loyalty.

Q: What is required to run Lumenzia v10?

A: PS v22.5 (I anticipate raising the minimum soon based on the public PS beta, as it addresses some issues that were in the initial release of the new UXP APIs in v22.5). Lumenzia v10 will run on both Mac and Windows (it is not specific to any computer hardware, just the version of Photoshop).

A: In order to launch a UXP version as quickly as possible, the initial release is focused on migrating existing capabilities. This is a complete top-to-bottom rewrite of 7 years of code, and has been in progress for over a year now. Future updates will be built on this platform, and there is enormous potential with UXP. The immediate benefits of v10 are primarily faster speed on Apple Silicon, a simplified installation, and a more modern look and feel to popup dialogs from the panel. There are some other minor enhancements coming as well, which I’ll detail when the official v10 becomes available later this year.

Q: Who should install and use the beta?

A: I encourage anyone to try it. You can install both v9 (the CEP panel) and v10 (the UXP panel) at the same time without conflict. Apple Silicon users should see a roughly 20% speed boost if you switch off Rosetta.

Q: Can I use Lumenzia on older versions of Photoshop?