Shooting in MANUAL is EASIER!

Some people may completely disagree with me on this, but I firmly believe that shooting in MANUAL exposure mode is actually EASIER than any auto mode (program, aperture-priority, shutter-priority, etc).  Why would it be easier to learn how to turn all the dials when the camera will do it for you?  If the camera was perfect – if it created the most beautiful exposure each and every time – then auto would be a “no brainer”.  But it doesn’t.  I shoot primarily with the Nikon D810, easily among the most sophisticated cameras available in terms of being able to automatically set exposure.   But even though it is amazing in that way, it picks the wrong exposure quite a lot, probably 10% of the time overall and >50% of the time in the most beautiful light (because the most beautiful light is often the most tricky).  Which means that I have to use “exposure compensation” to get the right automatic exposure.  In other words, I not only still have to understand exposure to shoot auto, but I also have to understand how this incredibly complex camera thinks – so that I can fix it when it’s wrong!  That’s much more complicated!  And that’s only half the problem.  Even when the camera automatically picks the perfect exposure, it still can’t make creative decisions about how to make tradeoffs in shutter speed, aperture, and ISO.  So you can get much BETTER results in most situations once you get the hang of setting manual exposures.

The good news is that exposure is pretty simple.  Once you’ve gotten experienced in metering, you can often get it perfectly right on the first image.  But if you get it wrong, you can easily tweak one of the settings to shoot again with a lighter or darker exposure.  For all the camera’s complexity, there are only four camera controls that affect exposure:

Ok, so if we have 3 knobs to turn, where do we start?  There’s no right or wrong approach, but here’s a general description of what I typically do:

My mental model for making tradeoffs in shutter, aperture, and ISO is essentially: 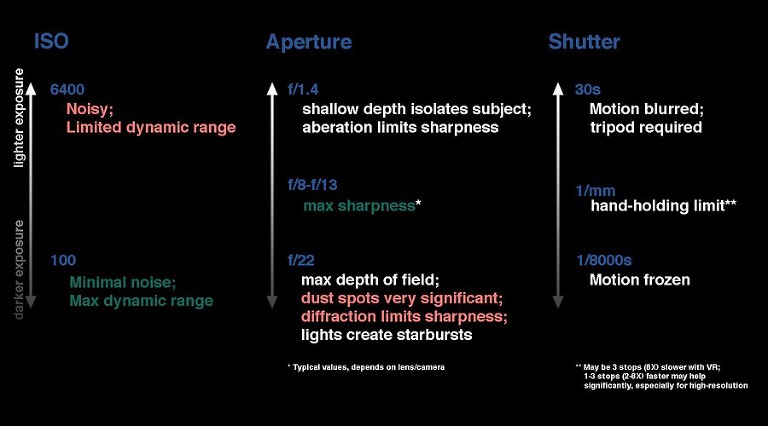 The difference between depth of field and sharpness can be a little confusing.  Steve Perry of Backcountry Gallery does a really nice job of explaining it in this video below.  For me, I basically shoot wide apertures when I want to isolate a subject (usually a portrait, especially when there’s just one person), and tend to steer towards f/8-f/13 when I want maximum sharpness.  I really try to avoid f/16-f/22 when I can due to loss of sharpness and the pain cave that is dust spots.  If I need to get to a slower shutter speed, I’ll often use a neutral density filter instead of stopping the lens all the way down to f/22.  And if I need more depth of field, I will sometimes use focus stacking or my tilt-shift lens instead of shooting at the smallest possible aperture.

But that isn’t the whole story.  I’m actually REALLY happy that my camera has an amazing auto-exposure and matrix metering system.  When I’m shooting in fast moving light (such as concerts), auto tends make less mistakes than I do.  And there are also times when I need to pay more attention to other details and the light is predictable (such as shooting kids on a cloudy day).  So auto definitely has a role in my photography, but I probably shoot manual 90% of the time.