When I think of Japan, I think of umbrellas.  I’ll get back to that…  I’ve been to roughly 85 countries in my travels around the world.  Every place I’ve visited has surprised me in some amazing way.  Japan is such a unique place that it stands out in almost every way.  One of those being the the way they care for strangers.  I can’t think of a metropolitan city where young children would be trusted to walk alone.  They might run into the street, misbehave, or something much worse.  But in Tokyo, I saw groups of five year-olds walking the street together to and from school, or wherever they may be headed (though the uniforms seem a dead giveaway).  Complete strangers look out for these children, and everyone seems to know they are safe here.  I had many situations where complete strangers also took care to look out for me, which brings me back to the umbrellas.

Twice in Japan, I’ve had a complete stranger give me their umbrella to stay dry in the rain.  On my first visit to Japan in 1999, I traveled alone to Hiroshima.  As an American, it was an incredibly humbling experience to stand in a park overlooking the A-bomb memorial – a lone ruin from the blast that wiped out nearly 80% of the city’s buildings in a moment, and hundreds of thousands of people in time.  Suiting the moment, it was raining steadily and I had nothing to keep me dry.  Sometimes, I love the solitude of the rain and it really didn’t bother me on this occasion.  But a couple of Japanese high school girls saw me and walked up to offer one of their umbrellas.  I tried to smile and politely decline – how could I accept such a thing?  But I couldn’t speak Japanese and they were clearly insisting I take it as they huddled together under their remaining umbrella.  So I accepted their kind offer and responded the only way I knew how, but saying “arigatou”.

I didn’t return to Japan until 2012.  I hadn’t forgotten those girls, but I hadn’t quite assumed that was typical in Japanese culture either.  And then one afternoon, I got caught in a heavy downpour.  I snuck under an obscure and unused doorway along a street to wait out the rain.  I don’t think most cars would have been able to see me hiding there through their rain-soaked windshields.  Yet after only a few moments, one of the passing cars stopped on the side of the busy road.  The driver got out, walked straight up to me, and insisted I take his umbrella.  Once again, we couldn’t understand each others words, but I again responded with a simple “domo arigatou”.

Since the movie “Lost in Translation” featured the Shibuya Crossing, I’d heard many times that it is the busiest pedestrian intersection in the world.  Inspired with my new umbrella, and knowing that I would see many more at Shibuya, I headed there to make this image.  I hung out on this street corner for an hour watching hundreds, maybe thousands of Japanese hustle by in the rain.  All the while smiling inside that so many strangers would be so generous with such an unprepared tourist. 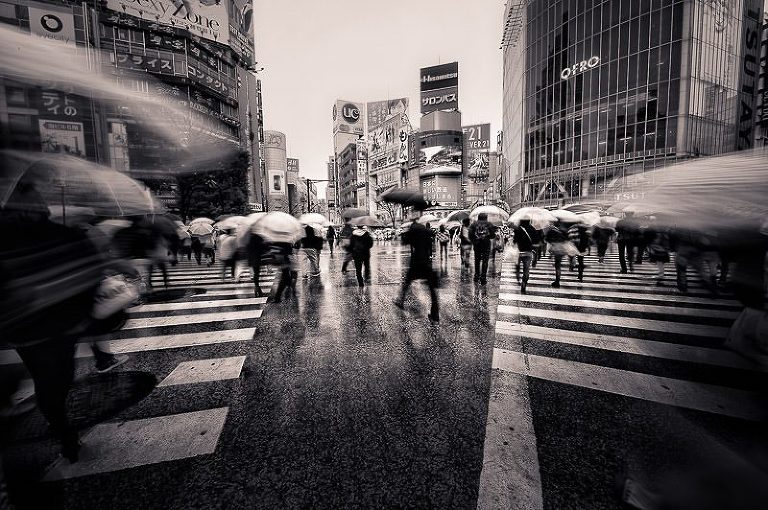 The Sky Tree »« Shooting RAW on an iPhone