As I wrote recently in article on how to assess the the best upgrades for Photoshop performance, it’s important to have some objective measures of performance in order to get good value for your money when upgrading your computer or otherwise optimizing performance. While there are a lot of great benchmarking tools out there, I’ve never felt there was tests designed to specifically assess Photoshop performance in a way that answered my questions. What performance should I expect from Photoshop with the latest hardware? Which features in Photoshop are most improved? etc.

So I decided to build my own benchmarking test for Photoshop: “G-Bench“, which I am making available for free. It will also be built into my upcoming Lumenzia v10+ and Web Sharp Pro v3.4+ updates (both should be available by Dec 1), where you can find it via the flyout (top-right three bars icon) under Utilities. And I have also created a standalone version of G-Bench in case you don’t have either or want to have a dedicated button for more frequent testing (which you can download for free here, as well as from the footer of my newsletters going forward). All of these panels are UXP panels, which means they can run natively on Apple Silicon (and are fully compatible with any Mac / Windows machine running PS 2023 or later).

Rational for a dedicated Photoshop benchmark

While it’s great to understand how fast your CPU or GPU is in general, it doesn’t tell you how fast a particular program will run. For example, with upgrade to the M1 Max (see my full review of the M1 for photographers), I found one video editor’s export time cut by 88% and another only cut by 35%. Software performance depends on the software as much as the hardware. If it isn’t optimized for multiple cores, GPUs, new instruction sets in the CPU, etc – then it may not show improvements in a generic bench test.

Furthermore, this applies not just to the program, but specific functions within it. For example, you might find that Surface Blur is suddenly 5x faster, while file saves only improved by 20% because they have different bottlenecks and may be optimized differently. So it’s important that your testing reflect the way you actually use the software. G-Bench is built to reflect the needs of photographers using Photoshop. So it focuses on testing where we tend to end up waiting: running filters, saving smart objects, etc.

Of course, you also use your computer for a lot of things other than Photoshop, so I recommend using G-Bench in addition to other benchmarks. They all compliment each other well.

Just launch the “test and compare” dialog by clicking the button in G-Bench, or via flyout / utilities in Lumenzia and Web Sharp Pro. The first time you use it, you’ll need to set your preferred folder. This folder is used both to save the results of tests you run as well as allow you to review and compare tests you have already run. Once you’ve set that folder, you can click “run a test” to begin. The test may take roughly 5-60 minutes depending on the speed of your computer. Note that the display will update sporadically while the test is running (ie, the preview may appear lagging or frozen in the middle of the test). When it is done, you’ll see a popup dialog with results. If you leave the checkbox in that popup checked, a CSV file with your results will be saved to your folder when you click OK.

You may compare your tests  to each other, or to the tests which come with the panel. The “result A” and “result B” dropdowns each contain the same full list of all available tests. You can even import tests from other people by putting a copy of their CSV file into your designated folder. The top of the list reflects tests in your folder, and the bottom of the list reflects tests which come with the panel. Just select the two tests of interest (set A to your system and B to the reference data) and the click “compare results” to create a graph of the “weighted time”, which is the ultimate score for each test.

If you’d like to compare details of specific items in the test, just navigate in your file browser to the folder you selected to open the CSV files in Excel or Numbers. The CSV file contains test conditions (such as computer hardware) and results of specific tests (such as the time it took to enlarge the image 2.5x). If you’d like to see the CSV files for the included tests or use a formatted template to make the results more pretty, please click “export included tests” in the test and compare popup window. Note that the result A/B dropdowns will not list the duplicates of internal tests, they will only show once as included tests.

The same hardware can return different results with the exact same test. There are a variety of reasons for this, and it is important to try to test under realistic conditions – but also under conditions which would be consistent to help compare one test to another.

How to interpret results 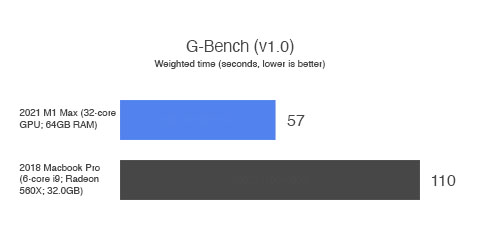 I would also encourage you to run the entire test a few times. You’ll likely see the main result (weighted time) varies by 1-5%. This is normal, and you assume that a result in the middle is probably most indicative of performance. If you see a much larger variation, that likely indicators some other factor at work – such as a background program being very active during one run and not another. It could also be the result of changes you’d made in Photoshop (such as disabling OpenCL, which is one of the factor tracked in the test conditions recorded in the CSV). You might also see variation from one version of Photoshop to the next (such as speed improvements after code optimization, or perhaps a delay if there is a bug).

The line item tests should be relatively straight-forward. Each test is fairly specific. The reported time is an average of numerous loops (in most cases). This repeat testing helps provide better accuracy, as the test time varies a little each run – even under the same conditions. The fastest and shortest loop time is noted, and if you see huge variability there, you may wish to re-run the test. This might be caused by some transient issue that delayed Photoshop, but does not reflect the results you would typically see

The line items include a “weighting“. The purpose of this is so that each test reflect the real impact it has on a general workflow. You can think of this roughly as my estimation of the number of times you would use a given feature (on average) to edit a photo. So a weighting of 0.1 for motion blur indicates that I expect very few workflows will use this specific feature, whereas a weighting of say 10 for Adobe Camera RAW indicates I expect that feature would be used frequently. It’s much more predictive than just adding up all the times, but it’s far from perfect and certainly not a representation of exactly how you work. We are all a bit different. If you would like to try different weightings, please use the “export included tests” option and then open the exported XLSX (Excel template) to copy and paste your CSV data and then view the analysis tab to try your own weighting and look at the new result. You should then do the same with another data set, as the weighted time is only meaningful when compared to another test using the same weighting.

The total “weighted time” at the top is calculated by taking each tests average loop time and multiplying it by its weight, and then summing up all those numbers. So for example, if a test has a time of 7.2 seconds on average and a weight of 2, then it will contribute 14.4s to the total weighted time.

A few other notes on the data:

A few general observations from my own testing

I’ve tried running the test under various conditions on my computer to see what impacts performance and which aspects of Photoshop tend to be impacted. Your results will differ, but here’s what I see on an M1 Max and 2018 Macbook Pro:

PrevPreviousCPU, GPU, RAM: What should you update?
NextA photographer’s review of the M1 Max Macbook ProNext