I drove thousands of miles around northern Minnesota this past season to capture fall color.  There was a solar storm during the new moon, and the skies are very dark here, so I got to take my first images of the Aurora Borealis.  I’d seen it once before in northern Canada, but shooting it along the short of Moose Lake was a completely different experience.   Half the lake is in the Boundary Waters Canoe Area Wilderness, a protected area with almost no human activity.  As I sat and waited, I was treated to a symphony of animals calling to each other.  Loons wailed as they flew over the lake.  I recognized the sound immediately after a particularly humorous family trip years ago when my dad decided that buying a cassette tape that features the various calls of the loons was a good idea.  I’m not sure which sounds I heard, but I know it wasn’t a tremolo (nice work, dad).  Then the coyotes started to howl.  Which is nearly as creepy as beautiful when you’re sitting in the deep black night alone with so little sound that you can hear your own ears hum when the animals fall silent. 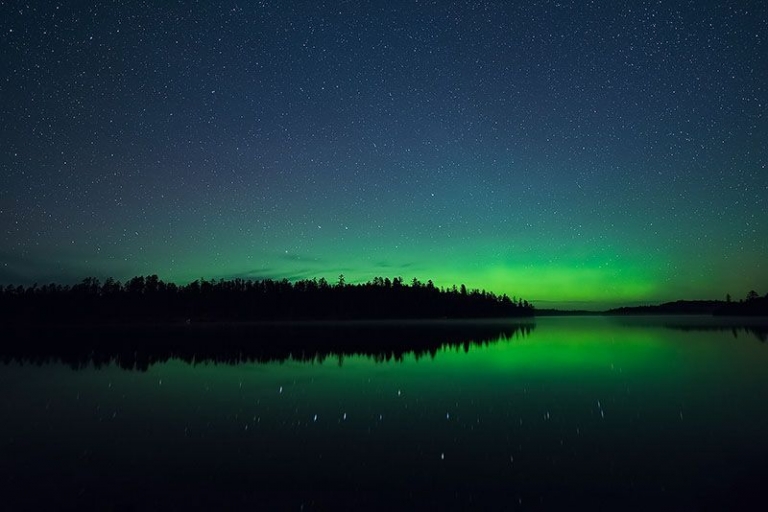 Post-processing for night skies is always very tricky.  To capture sharp stars, you need to keep your shutter speed relatively short (13 seconds in this case).  Which means that you’re shooting at ISO 3200-10,000.  Which means noise, lots of it.  I’ve found that I get very usable results using just the Nik Dfine plugin to remove noise from such an image.  But you can significant improvements over that by stacking multiple exposures.  Stacking the exposures and using the mean blend mode in Photoshop will average the exposures, which eliminates the noise.  Basically, you are combining multiple short exposures to get the equivalent of one longer exposure at low ISO.  The trick is to align the stars from each frame. And in this case, I needed two star stacks, because the stars rotate in the opposite direction when reflected in the water (so aligning the sky makes the reflection worse and vice versa).  So you need to fix each area separately and combine the results.

I use a dedicated stacking tool for the Mac called Starry Landscape Stacker (though I have not tried it, I have heard good things about Deep Sky Stacker for PC users – or you could install a virtual Mac on your PC, I do reverse to run PC programs on my Mac).  I have been very impressed with both the relative ease of use and the final results (I had great results with my first stack after spending only 15 minutes watching the tutorials and perhaps another 15 to actually do my first stack).  I used nine frames in this image to eliminate noise.  I would recommend using at least five, and you’ll probably see some benefit out to as many as twenty frames.  Theoretically, you could use more like 128 frames or more to get the same total exposure time as an ISO 100 exposure, but I wouldn’t recommend such extreme effort.  And you can still use a noise reduction tool like Dfine on the stacked image to further reduce noise.

I created a third stack with no rotation to reduce noise in the trees on the horizon.  I then layered all three stacks in Photoshop and used layer masks to blend them together.   I also added another sky image where the aurora was particularly bright.  I didn’t have images to stack, so I used Dfine to reduce the noise and match it with the texture of the stacks.  I used Lumenzia to blend the green aurora from that exposure seamlessly.  And then I finished the image with a selective color adjustment layer to bring out more green, darken the sky blues, and shift them slightly magenta to compliment the green.

Here’s a crop from a single exposure (including the same very minor RAW adjustments I made to all the source images): 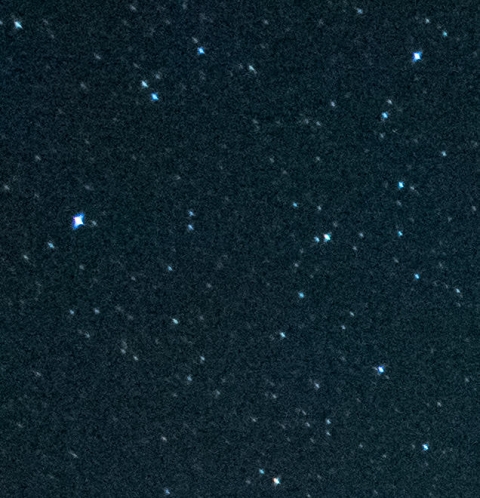 And here’s the same cropped area from the finished image (using just Starry Landscape Stacker and the same RAW settings): 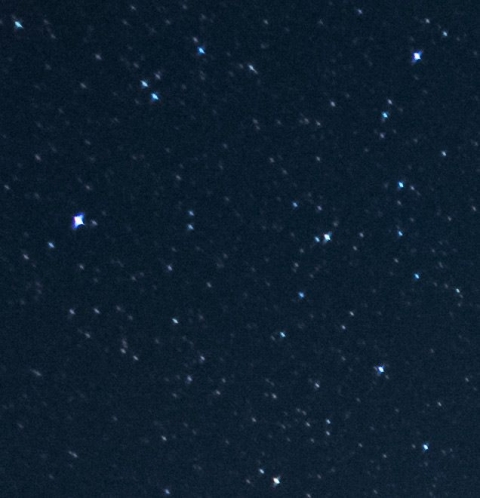