What is Deconvolution Sharpening and How to Use It

As photographers, we tend to be obsessed with pixels and detail. If that’s you, you’re going to love “deconvolution” sharpening. It is one of the easiest ways to get more detail from your images. 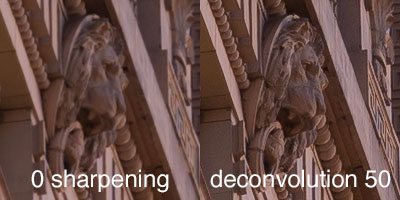 The Big Picture: What is “deconvolution” sharpening?

Few topics cause more confusion and debate than sharpening. We could easily end up in a spiral of meaningless debate over terms – so for the sake of this article,  when I refer to sharpness I mean the viewer’s ability to clearly differentiate small details (at a given resolution). That might mean that a sign on a building is easier to read, that you can better see the texture in a rocky landscape, or that you can see individual needle on a pine tree.

There are three essential types of sharpening in photography, including:

An image may use any mix of these types of sharpening, but they should be applied in a particular order. Capture sharpening should always be done first, followed by creative sharpening, and then output sharpening last after any resizing of the finished image.

Which brings us to “deconvolution” sharpening. This is a form of capture sharpening designed to offset the softness created by our cameras and lenses. Through some very complicated math and some assumptions about the ways our cameras subtly blur our RAW files, deconvolution sharpening can help restore much of that lost detail. (If you really want to nerd out, search the internet for “point spread function” and deconvolution to learn more – but you really don’t need to understand the details to use this awesome technique).

By using deconvolution sharpening, we are increasing the apparent detail in an image. Just this technique alone can probably help you enlarge a print another 10-20%. On a Nikon D850, increasing linear resolution by 10% would bring us from 46 megapixels to about 56 megapixels (multiply by 1.1 twice because the linear dimensions are applied twice to get the pixel count) without using deconvolution. That’s a huge gain that you can use to get better prints from old files, make massive prints from your current camera, or keep detail when you need to crop your image significantly.

How do we use deconvolution sharpening?

There are some software packages out there that promote their use of deconvolution sharpening, but some do not. Lightroom and ACR (Adobe Camera RAW) support it, but you wouldn’t know it because it isn’t labeled or even mentioned. Thankfully, it’s very easy to use if you just know where to look.

If you use my Lumenzia luminosity masking panel, just click “Sharp” and choose the deconvolution method. Everything is done for you. Otherwise, read on for instructions on how to do it with your version of Lightroom or Photoshop.

The “details” slider in Lightroom is really a choice between two sharpening algorithms. Slide it one way for deconvolution sharpening, the other for unsharp mask, or somewhere in the middle for a blend. The trick to working with deconvolution is to set the detail slider accordingly, and then set the radius slider to the minimimum, as we are working to extract small details.

So open up Lightroom or Adobe Camera RAW (Filter / Camera RAW Filter if the image is already open in Photoshop CC). Then go to the detail tab and move the radius slider all the way to the left (to 0.5) and the detail slider all the way to the right (to 100). That’s all you need to do to enable deconvolution sharpening. Once you’ve done that, just move the amount slider up or down until you get the amount of deconvolution sharpening you want.  I generally use somewhere between 30 and 55 for the amount, but sometimes as little as 20 or as much as 80. 50 is a very good place to start. It is generally best to evaluate the image at 100% when setting the amount. Finally, leave masking disabled (set to 0).

If you use Photoshop CS6 and do not have access Lightroom, you should use the following alternative approach for deconvolution sharpening. Go to Filter / Smart Sharpen, set the remove dropdown to Gaussian Blur, and the radius to 0.5px. The adjust the amount as needed. Higher amounts may be needed with this approach, so try 50-100. If you have access to Adobe Camera RAW, use the first method above. But if not, this is a great alternative that also produces great results.

There are of course other programs out there that offer deconvolution sharpening, and I’m not claiming that you might not get a little bit more out of another approach. However, I believe the Adobe deconvolution tools are ideal. They are very fast and easy to use. Most importantly, you can apply them on a Smart Object for maximum flexibility in your workflow.

To make things simpler if you don’t have Lumenzia, I’ve created a set of free deconvolution sharpening actions for Photoshop. Just open them with Photoshop (you should be able to double-click them, or just go to Window/Actions in Photoshop, then click the top-right menu in Actions and choose “Load Actions”). Once you have the actions in Photoshop, you’ll see options for low, medium and high sharpening – as well as a second set marked for CS6 users. Just click on the one you want to use and then click the play triangle at the bottom of the Actions panel. These actions can be used with both normal layers and Smart Objects. And you can always choose to click the open option to the left of an action to toggle on the dialogs if you wish to be prompted to choose the specific amount of sharpening you wish to use (be sure to click over to the details tab if you are using the CC actions, as the Camera RAW Filter does not show that screen when first opened).

When should we use deconvolution sharpening?

I use it on nearly every portfolio image that I think I might print some day. It’s used to increase detail, so this isn’t a process you need to think about if you’re only going to shrink the image for the web.

When in doubt, just use it. It is quick and easy. More importantly, deconvolution sharpening should be done early in your workflow. It does not need to be the first thing you do to your image, but it should definitely be done before creative/output sharpening or resizing your image. The assumptions that make deconvolution sharpening work fall about once you start making other such pixel adjustments to your image. and the results can look pretty poor if you use it too late in your workflow. You can apply deconvolution to a TIF without issue (within the workflow limitations just mentioned), it does not need to be done on the RAW file.

What about noise and halos?

When I’ve told some photographers about this approach, they’ve made comments about seeing noise. And they are right. This approach will turn exaggerate noise in smooth areas of the image, such as calm lakes and blue skies. That’s no problem, we can easily fix that by blending the image to use deconvolution for increase detail in parts of the image where it works, and avoid deconvolution in areas where it causes issues.

Because of this, I recommend always applying deconvolution in Photoshop. Lightroom and ACR will not let you apply deconvolution locally. Yes, there are “sharpness” and “noise” sliders for the local brush, but it is not the same.

The second method is to use a Smart Object, which I greatly prefer for its flexibility. To do this, first select your image layer(s), right-click, and convert to a Smart Object. Then go to Filter / Camera RAW Filter, switch the detail tab (the one with triangles), slide radius to the left, detail to the right, and select the amount of sharpening you wish to use and click OK. This will sharpen the whole image, but you can now use the Smart Filter Mask to apply the effect just to the areas that need it. You can paint black on the mask to remove sharpening over smooth areas, or invert it to black and then use white to paint in the areas of detail.

What about other forms of sharpening?

There are literally books written on each of these topics, so I can’t possibly cover all of sharpening in this post. But I want to leave you with a sense of the big picture.

When I’m ready to output a file for print or the web, I create a flattened copy of the file, resize it, and then apply output sharpening to the file last. I use various Photoshop sharpening tools or Nik for output sharpening. The goal at this stage is to either get an image that looks optimal a monitor for web use, or something which is a bit “crunchy” (oversharpened) when preparing for print.

PrevPreviousMy Macbook Pro and Time Machine just crashed – Now what?!
Next3 Great Ways to Enhance Your Photos with “Replace Color”Next